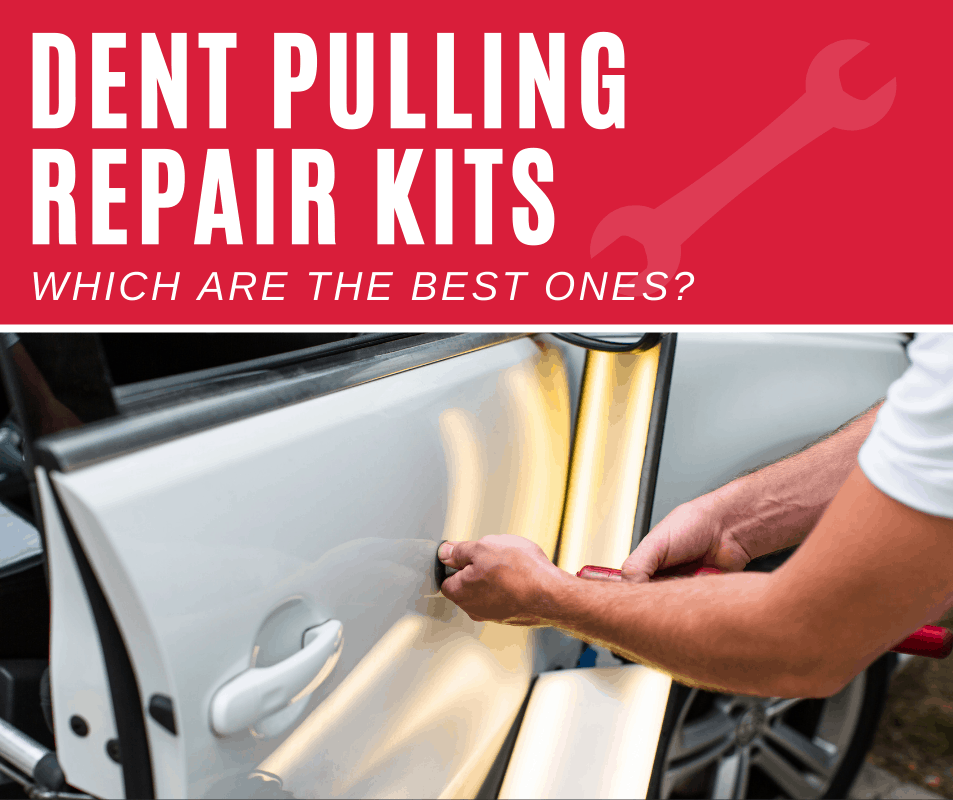 Is there a dent in your car that you're looking to fix yourself?

You've come to the right place!

In this ProperMechanic.com guide, you will learn the following:

Below is a quick list of all our top products. Keep scrolling to learn more about how to choose and use the best dent pullers on the market! 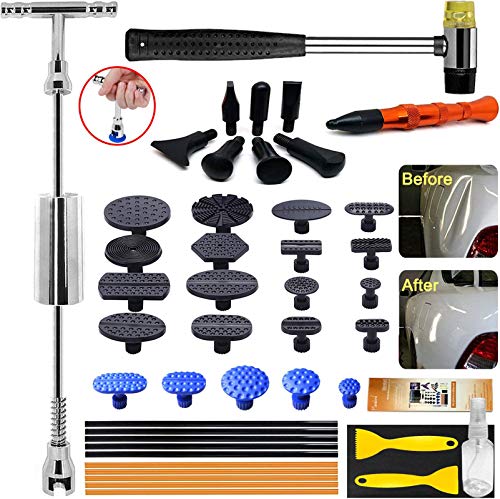 Our top pick is the Manelord kit because it is a best seller on Amazon, and it comes with all the tools necessary for the job without including excess pieces.

If you are looking to save money on pulling dents out yourself, you will be able to do it easily with this one of these Manelord kits because they are priced reasonably, and they work!

Be sure to browse through the different kits that Manelord offers to select the one that is specific for your job. For example, if you already have a hot glue gun, there's no reason to purchase another one.

What Are Dent Pullers For Auto Body Repair?

Dent pullers are a range of tools designed to help you get dents out of metalwork.

Although these dent kits provide just part of what you would need as a professional auto body technician, they are super affordable when compared to taking your vehicle to a pro, and they allow you to do about the same quality of work.

If you just want the dent pulled out, one of these kits will work perfectly. However, if you want a 100% perfect job then you will need to do a little bit more research and buy some Bondo!

Read More >> How Do You Remove Scratches Yourself?

What Are The Different Types of Dent Pullers For Auto Body Repair?

One of the simplest ways to pull a dent out is with a suction cup dent puller.

All you have to do is wet the rubber suction cup with water or alcohol, press it onto the dent, and close the handle.

With full suction, the dent will easily pop out without a problem. There are multiple different sizes of suction cups for sale across the internet, and they are always handy to have around the garage when an unwanted dent shows up.

A slide hammer is connected to a piece that is either glued or welded to the middle of the dent. From there, you connect the slide hammer and slide it away from the dent to hit the dent out.

Bridge pullers work great for big dents, and they work similarly as the slide hammer.

Use a hot glue gun to glue the appropriate bit onto the dent, then tighten the middle part of the bit.

The leverage from the rubber bridge legs on both ends will pull the dent out when you tighten the threads.

The T bar design is super simple to use. After you have glued the puller tabs onto the dent, you simply install the T bar and pull outwards until the dent pops out.

This eliminates the need of having to uninstall the panel or bumper and push from the inside out.

You can pull out dents by simply heating the ends multiple glue sticks and sticking them onto the affected area.

Read More >> How Do You Revive An Old Car Battery Yourself?

How Do Dent Pullers For Auto Body Repair Work?

Note: Heating the dent will make it easier to work with. For example, if you put a suction cup dent puller in boiling water and stick it onto the dent, it will form better to the contours and have more suction when you squeeze the handle.

Although dent lifters will successfully pull the dent out of the panel or affected area, they might not make the panel look 100% new again.

It will still probably have some sort of line or evidence that there was a dent there before.

Most professional body shops will grind down the dent and use a setup like a stud welder Bondo and a special cheese grater tool to make the surface completely smooth once again.

The only downside to this is that you will have to repaint the panel. Here is a great example of how a pro would handle a dent repair.

Sometimes the only real way to get a 100% original repair would be to replace the panel with a brand new one--which is a lot pricier--and probably not worth it in the long run.

But then again, if the insurance is paying for it, it doesn't matter!

What To Look For In The Best Dent Pullers For Auto Body Repair?

You need the dent repair kit that best fits the dent you are looking to pull out.

If the kit doesn't include a hot glue gun, you'll want to purchase one. They come in handy for making dents disappear!

There is a pretty wide range of prices for tools that all perform the same basic function. It's not always necessary to purchase the most expensive option. But if you do buy something cheap, it's a good idea to read other customer's reviews.

Read More >> What Are The Best Car Detailing Kits On The Market?

Our Reviews Of The Best Dent Pullers For Auto Body Repair

Want to save some money by avoiding the body shop? Try this Manelord Auto Body Dent Repair Tool.

This tool kit is super easy to use. Just select the suitable end attachment that best fits the shape of the dent you are pulling out, then use a hot glue gun to attach it to the middle of the dent.

After you have glued the dimpled end piece onto the dent, all you have to do is attach the handle, and pull the dent out. Then you can clean off the residual glue with alcohol spray and a plastic scraper.

When you have the dent that needs to be pulled out quickly, this Manelord Auto Body Dent kit is a great option.

Want your car's body to look pristine at a reasonable price? This is probably the most practical dent repair kit that will get the job done and won't cost you an arm and a leg.

Do it yourself dent removal was never easier with this simple kit that allows you to remove auto dents without the hassle of repainting or hooking up a welder.

One of the coolest details about this set is that the glue gun plugs straight into the car! So you don't have to worry about running an extension chord when gluing up. 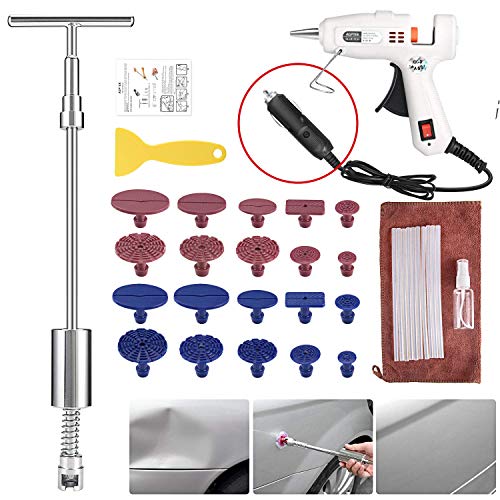 Looking for the most professional kit on the market for pulling dents?

This Gliston kit comes with everything you need and more for the job, including an LED reflector board, hot glue gun, pulling tabs, rubber hammer, slider hammer, golden dent lifter, rubber scrapers about 50 different end attachments for gluing onto dents. 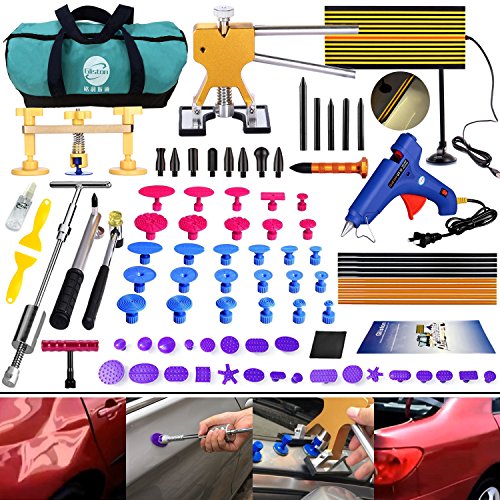 Choose from this 89-piece set and the other 45-piece offer that Gliston puts on the table to help you fix annoying dents in not only vehicles but other household appliances like refrigerators and washing machines.

This is the smaller kit that Gliston makes for easily pulling dents out of your vehicle or even other household items like washing machines and refrigerators(yes, washing machines get dents in them too!)

Equip yourself with bridge and hand pullers along with a hot glue gun to stick the applicable tip onto the dent. 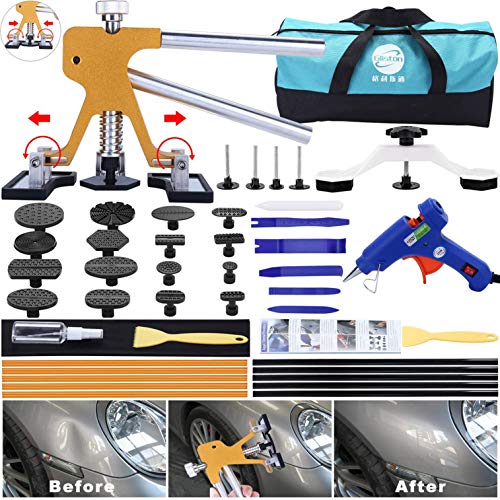 We like this kit because it comes with a bag, so you can keep all of its contents in one place without losing key components.

This kit even comes with a plastic trim puller set that will help you pull off bumpers and trim pieces without damaging them.

Here is a 60-piece dent puller set that will have your car looking like new again at a price that isn't unreasonable.

This is one of the more logical purchase options because it comes with almost all different types of dent pullers including the T puller, golden dent puller, and even a bridge puller included with a hot glue gun and all the pieces necessary for pulling small and large dents.

Pick up this set, and store it conveniently in its bag in your garage space where you can keep all the pieces together in one place. 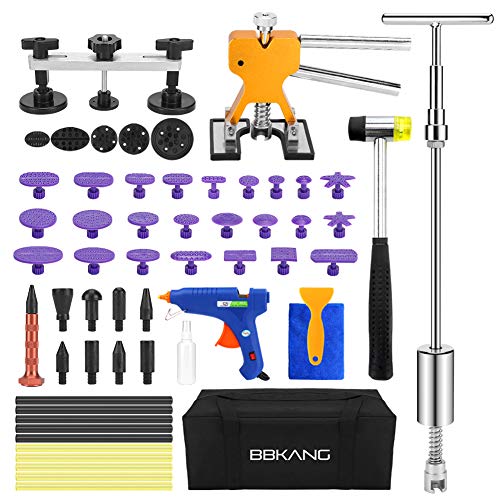 Car dent removal doesn't have to cost a lot of money, and with this kit, you will have all your dents pulled without paying the expensive price of a professional body shop who will charge you a lot more.

This is a great kit for you if you are looking for just the essentials and already have a hot glue gun. Pull out smaller and larger dents with this affordable and essential kit. 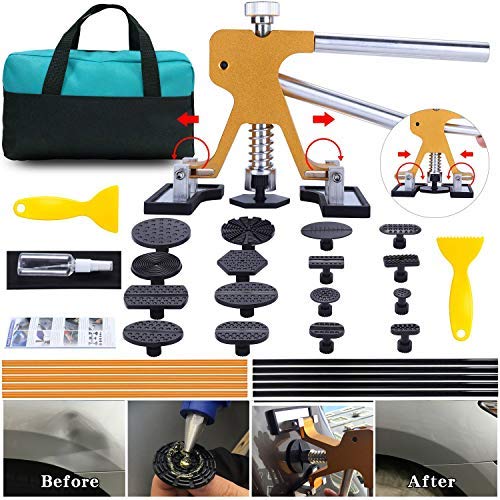 Looking for the affordable dent kit that comes with all the different types of effective dent pullers?

This Super PDR kit gets the job done thoroughly, and it costs less than other kits similar. With 68 pieces included, there isn't any dent you won't be able to pull with this complete kit.

This kit is more complete than other kits, with 2 T pullers, tons of different pull tab tips, a plastic scraper, an alcohol spray bottle, two hammers, a golden puller, a bridge puller, and more. 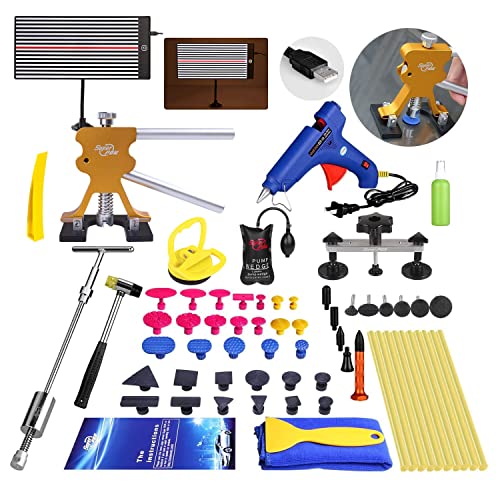 This YOOHE dent removal kit comes with everything you need to pull out most dents, including a hot glue gun, bridge dent puller, golden handled dent puller, plastic scrapers, alcohol spray, and various sizes of dimpled ends for gluing onto the dent.

So, if you are looking to save time and money on removing large or small dents, and you need a super affordable option, here it is.

Pick this set up from Amazon shipped right to your doorstep for a steal of a price. 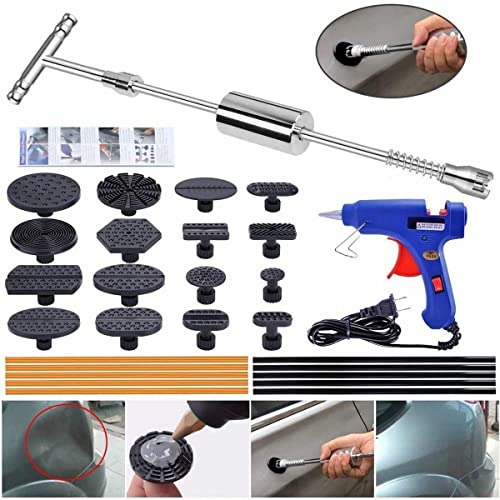 Want to save some money by avoiding the body shop? Try this Manelord Auto Body Dent Repair Tool.

This tool kit is super easy to use. Just select the suitable end attachment that best fits the shape of the dent you are pulling out, then use a hot glue gun to attach it to the middle of the dent.

After you have glued the dimpled end piece onto the dent, all you have to do is attach the handle, and pull the dent out. Then you can clean off the residual glue with alcohol spray and a plastic scraper.

When you have the dent that needs to be pulled out quickly, this Manelord Auto Body Dent kit is a great option.

What's the difference between taking my car to a body shop and using one of these kits?

There is a big difference between taking your car to a professional for body repair and using one of these kits, and it depends on the quality you are looking for in the repair.

We want to let you know straight up that a well-rated body shop will perform a repair that outrates the quality of any of these kits, because the pros use tools like welders, Bondo, cheese grater tools, and more to do a real professional job.

You are now better prepared to handle dent removal and repair! Use your skills wisely!

Remember, ask us any questions on our Proper Mechanic!