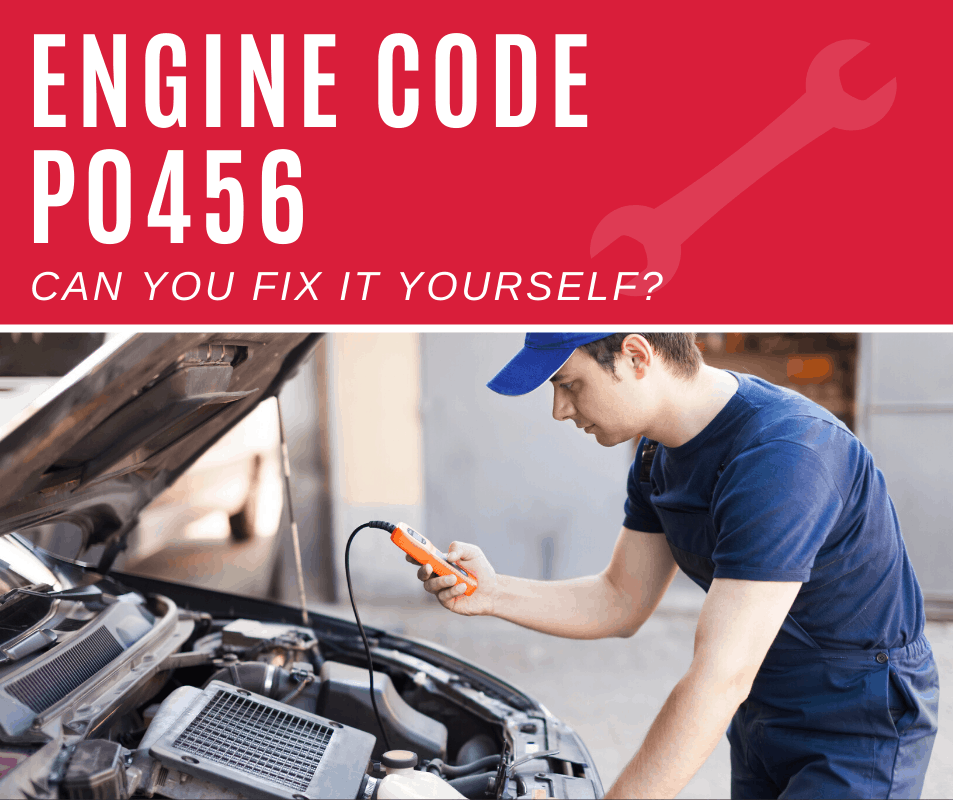 You've come to the right place!

In this ProperMechanic.com guide, you'll learn:

The check engine light came on once again in your car, but it's still running relatively smoothly, right?

Make sure your gas cap is installed correctly before proceeding!

You plug into the OBD-II port and run it for trouble codes, and it tells you that there is a small leak in the evaporative emissions system (EVAP).

What's the EVAP system? It's a system that prevents gasoline in the fuel tank from evaporating into the atmosphere. Diesel engines do not require an EVAP system.

The EVAP system consists of these parts:

The p046 code means that there is a small leak in the evaporative emissions system.

One of the parts listed above either has a hole in it causing fuel vapors to leak out, or one of the two system valves has failed.

And never underestimate electrical problems associated with any of these components that could also throw the p0456 OBD-II trouble code on the PCM.

Here are some possible symptoms of the p0456 code:

Here some possible causes of the problem

Read More >> What Are The Best Spark Plugs For Fuel Economy?

The best way to check for leaks in any vacuum system is by performing a smoke test.

By running smoke through the closed system, you can shine a light on the gas tank or charcoal canister and find out exactly where the leak is because there will be smoke coming out of it.

The purge control valve is either next to the charcoal canister underneath the vehicle or under the hood of the vehicle.

It can be disconnected for access to the system and tested with a smoke machine.

Most mechanic shops are equipped with smoke testers to handle this situation easily when it arises.

Here are the basic steps to diagnosing a p0456 code:

In many instances, the problem is simply that the gas cap isn't installed or isn't screwed on all the way.

Check the seal of the fuel cap also and make sure it isn't ripped or corroded.

One of the most common causes of this code is because the purge valve seal is leaking.

Locate the purge valve(usually under the hood) and remove it.

You can easily test the purge valve by trying to blow air through it with your mouth. Since the valve is normally shut until the voltage is applied, you should ideally be able to blow through it and it should be completely blocked.

You'll know that it's a purge valve malfunction if you blow through the input side and air comes out of the output side. You can do this either with a vacuum pump or simply your mouth.

Locate the vent valve(somewhere near the charcoal canister) and unplug the electrical connector.

To check the vent valve, you must apply 12V to the two-wire electrical connection. The vent valve should shut(and properly) when voltage is applied.

If you still haven't found the obvious problem of why this engine code was stored on your OBD2 scanner, you'll need to perform a smoke test.

But first, you'll need to close off the vent valve by manually applying 12V of electricity to it, and you may even need to remove the fuel tank to get a good glimpse of where the small leak is coming from and fix it.

Nonetheless, if you are ambitious, you will find a small leak!

Just unplug the EVAP hose that goes into the purge valve coming from the fuel tank, and send smoke through the closed system with the vent valve closed(12V applied).

You'll know there's a system leak if you see smoke escaping out of a hose, the charcoal canister, or the fuel tank itself.

Check all fuses that go to the EVAP system.

If you have a nice scan tool that allows you to activate each solenoid valve, you can use a multimeter to check that each electrical connection is getting the correct voltage by activating them with the scan tool.

Because these types of scan tools are generally pretty expensive, you may have to take your vehicle to a professional mechanic shop at this point if an electrical problem is suspected.

Don't get discouraged if you can't find the issue right away! This system can be a little tricky to diagnose sometimes.

Read More >> What Are The Best Head Gasket Sealers?

To fix this code you have to replace/repair the part that has gone bad/has a hole in it, whether it's one of the hoses, the fuel tank itself, the charcoal canister, or one of the solenoid valves.

Here is a list of solutions based on diagnostic results.

Reinstall the gas cap, and reset the check engine light either by unplugging the negative battery terminal or using an OBD scanner.

If the check engine light doesn't come back on within ~100 miles of driving you then know you forgot to install the gas cap, and that was the only problem.

If you have found that the seal on the purge valve is bad, replace it!

For the purge valve: simply remove the input and output hoses(usually held on with plastic clips that slide out) and install the new purge valve.

For the vent valve: This may require a little bit more neck bending. Locate the vent valve, remove, and replace. You can use the service manual that is specific to your vehicle as a reference.

In the worst-case scenario, you will have to replace/repair the fuel tank or one of the EVAP system's hoses. This may also include replacing the fuel tank pressure gauge depending on the vehicle.

Remove the fuel tank, it's hoses and electrical connectors.

Replace the part that is leaking.

If you have found an electrical problem, now is the time to fix it.

If an electrical connector is broken, you'll have to contact the dealership for a replacement.

Replace the powertrain control module if defective. There might even be a recall campaign that has already been issued by the manufacturer for the specific issue.

You now have a better idea of how your vehicle's EVAP system works, and how to fix an EVAP leak.

Again, don't get frustrated if you don't immediately solve the problem.

This can be a tricky issue to pin down, and it may be worth taking the vehicle to a professional if you don't have the proper tools for putting your vehicle up in the air and making the fix.